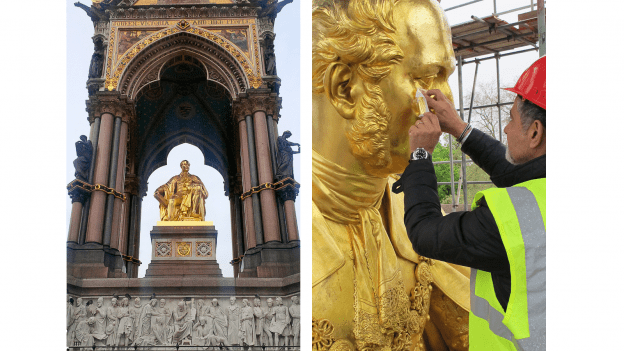 Titian Studios in London are one of Europe’s premier studios / workshops for high-end restoration and conservation. Their talented team has a varied skill base capable of undertaking a wide variety of projects, whether residential or commercial. The Company was founded in 1963 and Rodrigo Titian was taught the trade by his father. They run a thriving workshop and Rod and his wife Rosario have passed their knowledge on to many artisans and restorers who have done apprenticeships under their expert guidance and have since gone on to develop their own workshops.

It pleases us to say that we have supplied Titian Studios with gold leaf and gilding materials for many years and have become good friends with Rod and his team. Due to the company’s extensive skill base and “ never say never” attitude, the projects we have worked with them on have been as varied as is possible.

We supplied leaf for the re-gild of the Royal Albert Memorial, the Dome of the Guru-Nanak temple in London, the gilding of various interior hotel projects including the Dorchester and the Sheraton Hotels, London. Also, we have supplied leaf for a variety of high-end residential projects using many different metals, Caplain, Palladium, Platinum, and Champagne gold leaf.

An interesting, but unusual, project that we supplied leaf for was a commission for gilded shoes and accessories. These were to be shown to an audience of worldwide fashion icons at a fashion show during London Fashion Week. Despite the strange nature of the request the talented team of gilders at Titian was not fazed and yet again they produced some lovely gilding work… oh to own a pair of those shoes!